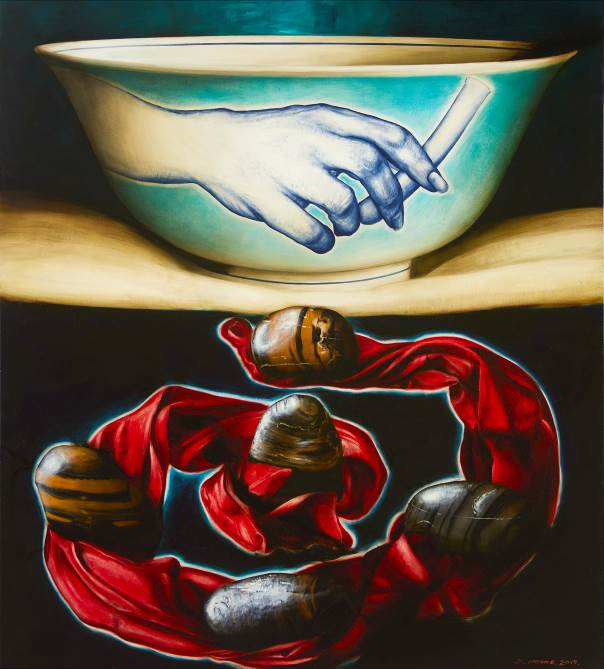 In Praise of Marie Curie: Work and the long journey

Directly upon hearing your energised description of Marie Curie’s work, difficulties and achievements I imagined an image for your cause which included some of the elements I had long used in my artworks.

A beautiful bowl of Chinese origin from the Kang xi period (which I own) is the site for an image of a woman’s hand holding a test tube.  It is her and her business – that of purifying and clarifying.  Several of my paintings (which you will see in my book) use the bowl a site for thought, inspiration, spirituality – things of the mind.

The bowl floats on a folded piece of cloth – its role as a container overlaps with the concept of a boat in which a character, a spirit if you will, journeys on some sort of eternal sea or river. That is Marie Curie!

In much of my work I have used the foreground to represent things of the world, “the material” that relate to the upper section – in this case rocks, crude and unrefined sit on a spiral of red silk.

My journey into oriental aesthetics and poetry revealed that rocks in a stream can be seen to represent problems which are being washed, worn and moulded in a stream of wisdom.

Curie was able to do precisely that through her strength of character!   She applies all her skills and the rocks/problems are transformed.  She overcomes the death of her husband and collaborator.  She discovers new elements – polonium and radium and She battles misogyny, financial difficulties and indeed her own ill health and death due to unknown effects of radiation.

For me then this image seems to reveal her and make sense of many of the defining difficult moments of her life and to show how she got around these “stones” to be the wonderful triumph that she has been for more than a century.

There are no reviews yet.

Be the first to review “Dean HOME” Cancel reply